I didn’t get anything in this week’s show. A-Boo! I hear you say. I think I should have submitted the Samsung Chips joke. Never mind there is always next week.

As you may be aware, I did some review of a couple of previous episodes and seeing as I was [s]bitter[/s] having a bit of spare time I thought I’d do this episode.

I’ve listened to the broadcast and I have tried to categorise the jokes broadcast against their guidelines for what they want people to submission.

First of all, I do not include Angela’s monologue in the stats as this isn’t something that members of the public can submit to.

Secondly, there is no released details on who has written what, but occasionally they do tweet out who wrote what. If I had to guess, these are staff writers/invited writers who are paid to write for Newsjack rather than people who have, that week, submitted 6 one liners and 2 sketches.

Thirdly, this is my analysis. The assumptions I make are mine, as are the conclusions I come to. Newsjack have confirmed they don’t agree with all the conclusions…interesting use of ‘all’ there ;).

Hi Thanks for this – we find analysis like this interesting but can’t agree with all the conclusions – we do have some sketches written by in house writers – but these are writers we spotted as they sent stuff into Newsjack… #AskNewsjack 1/2 https://t.co/rpdL6dy1HR

There we have it. About 21 minutes of the 28 minute show can be submitted by members of the public. Much better stats than some of the previous shows I’ve looked at – there has been an increase of about 30 seconds to both Breaking News and Number Crunching. The Sketches have also increased by nearly 2 minutes! Great news to the writers.

Breaking News continued to have 3 sections in the show and there remains only 1 Number Crunching. I predicted we’d see a strong lean to Politics (Trump and May) but really we saw only 4 oneliners/sketches in the politics bracket. Perhaps the last series used up all the trump jokes. I think it probably has been affected by The Mash Report but I guess we’ll find out.

World News was the largest section with 12 items. Its like WN and Politics have switched places! 😀 Apart from Science & Technology, the others are all pretty similar. 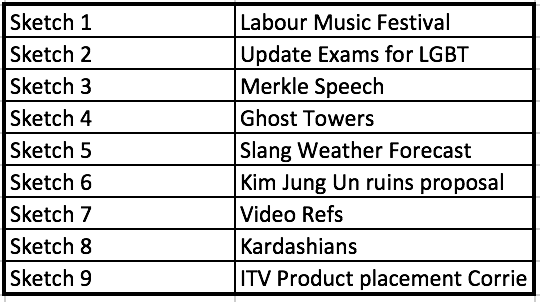 I think sketches are the hardest to write. A topical sketch based on a news article within 1 week of the submission date? Hard work indeed! Add in that most of the sketches are 2 minutes or more, not an easy thing to write. So the ‘man on the street’ has to find a news story and write something very funny and the advice is ‘make it a recent event’. Everyone I know who submits does so with some news story within 48 hours of the submission deadline. Submission was Monday 5th so I’d think that people would search for stories from Saturday at the earliest. Saturday is the 3rd.

The oldest article I can find is the 22nd January – 2 weeks before the submission date! Then there are two from the 30th and two from the 1st of Feb. I don’t think the producers/script collators would accept user submissions 2 weeks old, and I’m not sure they’d even take items based on Thursday 1st as these would be a week old by the time it is broadcast. I don’t even think they’d accept something based on events from Friday 2nd. Based on this, and the dates I can find (strange I find nothing about the movement of the military parade), 6 out of the 9 sketches are from news events that happen well before people submitting would choose to write about.

The first episode of Newsjack probably wants some strong sketches so I think most (if not all) of the 6 would have been written by staff/invited writers and not submitters. I’d love to know from the production team whether my calculations are close.

Three sections on this show. A good amount of time for one-liners. A mainsplaining joke is a bit old-hat, in my opinion. And referencing Lewis Hamiliton’s dress wearing nephew in a joke pushes the boundaries of a recent reference. But it does up the ‘sport’ category for jokes so there is that.

Talking about how old some of the jokes were, Disney buying Fox was from DECEMBER 2017. I really don’t think thats topical anymore. I also struggled finding a link to the Hummus story but the one I did find was from 28th of January. Is that topical? Probably close enough but I feel that anything NOT within the last 3 days before the submisison deadline probably was written by ‘staff/invited’ writers.

I think maybe the FTSE joke was written last week, but luckily the market is collapsing so it was still topical!  😀

The breakdown of topics for Breaking News is as follows; 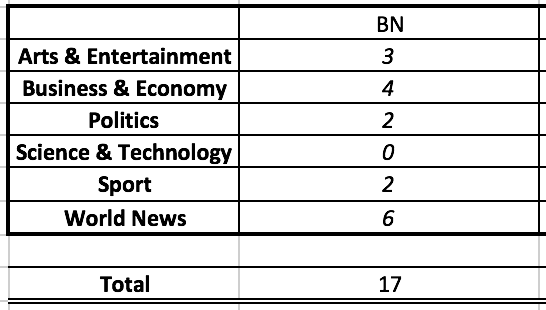 A healthy number of one-liners for Breaking news. No science & tech this time (although maybe the Samsung joke could be moved there from world news). Not lots of trump jokes but a cool reference to the Mash Report’s cartoon.

There were 7 number crunchers in this episode. The Bitcoin joke was a good one – better than the one I wrote! I’m just annoyed I didn’t write it! Some of the topics were a bit rubbish – Dry January, best sex at 65, and £20 valentines Maccy D’s meal. I wonder if this means there can be no valentine’s day jokes in the 2nd episode?

I still think that Number Crunching is a section that doesn’t have long to live. Back when it was ‘vox pox’ there were two sections in the show, but Number Crunching still only has one. The 300 stray dogs story has recently resurfaced but I think this is something that has been around for a while. The rest were fairly recent stories so I think they were submissions from the public. 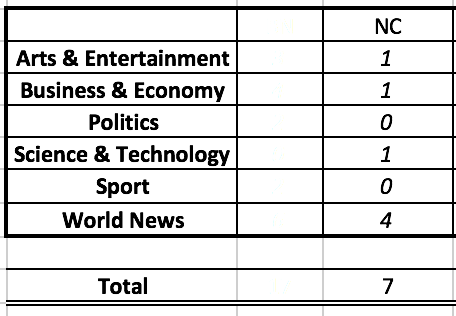 No political NC or Sports NC – Which when you consider the Superbowl was on, I’d have thought they’d have had something on that. I’d have thought there was also something in Politics that could have been pick up but they decided against it. By having more than 1 Number Crunch section they could probably fit in 10 during the shows.

It will be really interesting to see what episode 2 is like. I doubt there will be any jokes based on 2 week old (or older!) stories.

What are your thoughts on the first episode of the new series of Newsjack? Let me know in the comments? Did you write some of the jokes? I’d be interested to know which ones 🙂

*please note that I realise that I spelt ‘Markle’ wrong in some of my tables. I just couldn’t be bothered to fix them!

This site uses Akismet to reduce spam. Learn how your comment data is processed.