Another day,  another gig. This time it was for Eddie Izzard. A month or so ago I got a tweet from Soho Theatre saying the was doing a  triple header of his Force Majeure show. I’ve not been at the Soho Theatre since seeing Pete Firman (the magician) last year. One I thing I noticed for Pete’s show is that they now do allocated seating at the venue’s theatre room. This is great news as you no longer have the mental queuing starting 15 minutes before the doors open as your tickets have your seat number.

The reason for the triple bill was he was going to perform the show in French, German and English. When I booked the tickets I checked over and over again to make sure I got tickets for the correct show. 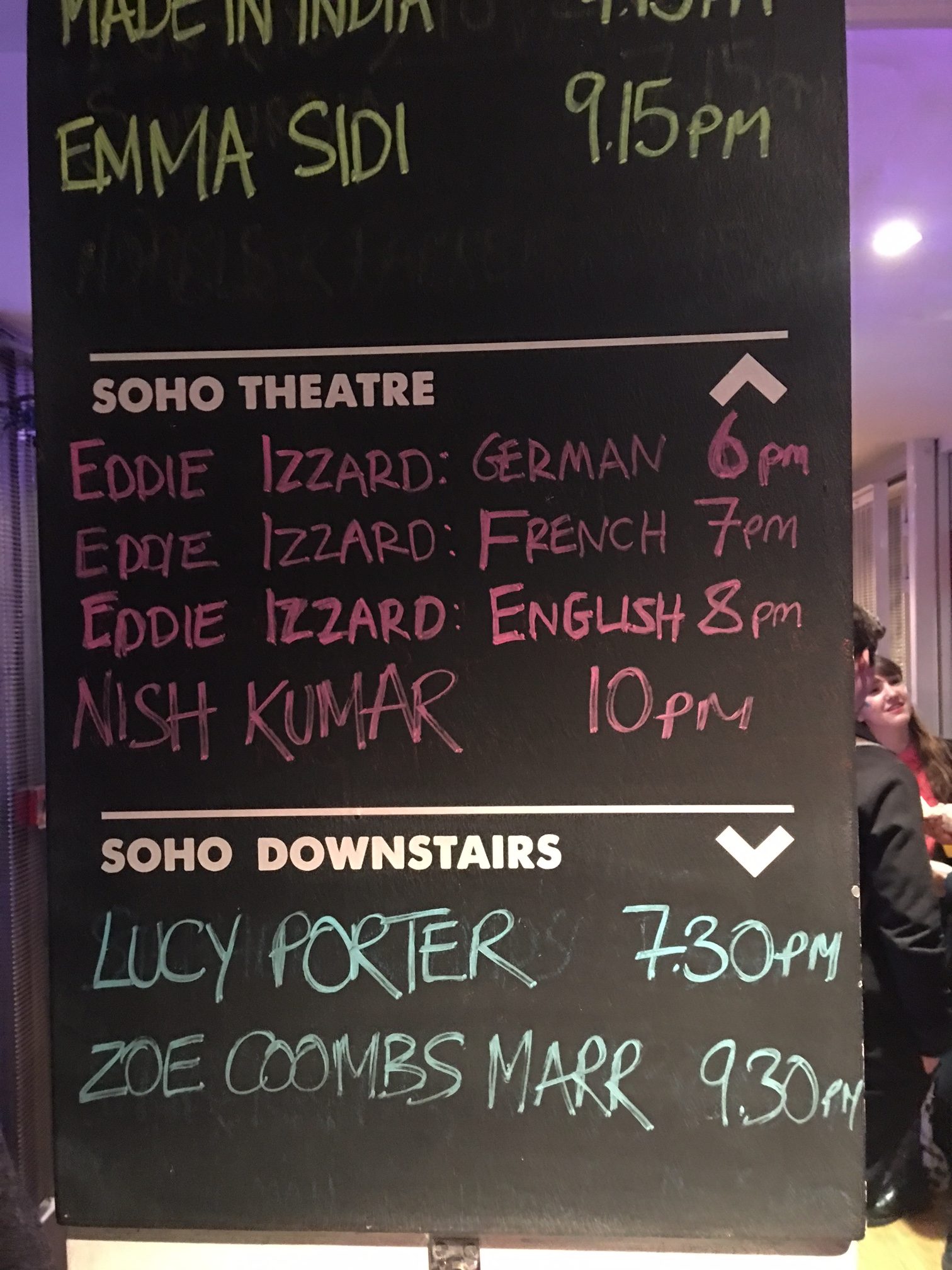 The tickets I purchased were at the end of a row and when we arrived at our seats there was someone already in them. The conversation went like this.

The guy reluctantly left our seats and moved to his seat. I go for end seats as you aren’t as squeezed and I can stretch my legs out in the aisle. Does that make me an arse for not moving? Its not my fault he couldn’t buy seats together. Anyway…this has little to do with Eddie’s show.

There was no fan-fare for Eddie to come out to, the lights dimmed and he walked out from behind the curtain. There was a rapturous applause immediately and the show started.

I remember seeing Eddie Izzard’s first video show and finding him hilarious. By the 3rd one I found his surrealism not to my taste. I still laughed but not as much as the first show. Unfortunately this show felt more like the 3rd show than the 1st.

He had already performed the show twice that evening, in two other languages, and that might have affected the energy her performed with. Some of his ad-libs didn’t hit the spot and occasionally his surrealism lost steam – “I’m a transvestite…..in a ……..skip.” – it felt like he didn’t have the confidence in the ending of the sentence.

I did have a proper chuckle at the death of Caeser, mainly due to the word play with the other characters in the scene. I also enjoyed the act-out of Martin Luther hammering his 95 theses to the church door. This was performed in German and the whole audience understood everything that was happening even if, like me, they didn’t consider German to be a language they spoke. The show started talking about human sacrifice and ended talking about olympic dressage and dressage horse burglars. Very ‘out there’ as a concept but there was much laughing through-out the theatre. The show ended and Eddie added a few words afterwards about staying engaged in politics and not giving up the good fight against those who want see the UK as a protective Island that doesn’t welcome people.

As we left we both were happy to have attended. We enjoyed enough of the show but would not have been happy to have seen something like this in a larger venue (with the larger costs!). I’m happy to have ticked off seeing Eddie Izzard from my list of comedy people to see. When we got home I shared a clip of Eddie’s Cat/Drilling behind sofa and then his DeathStar Canteen scene. These made me laugh LOADS and reminds me that he definitely has written some excellent stuff. I probably wouldn’t watch him again although if he does any warm-ups for a new show at a venue like Soho Theatre then I might buy a tickets, just as long as he hasn’t already done 2 other hour long shows immediately beforehand! 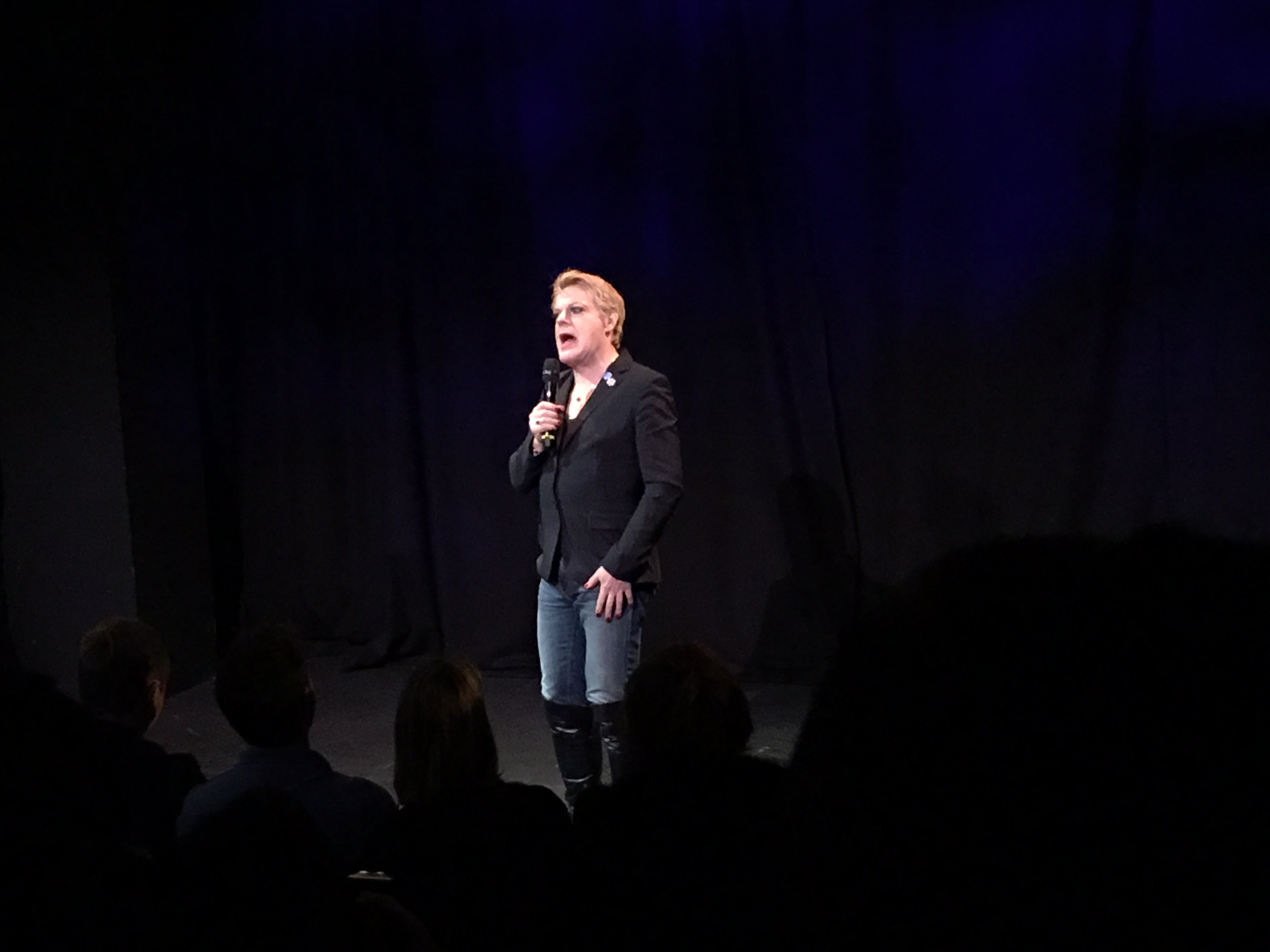 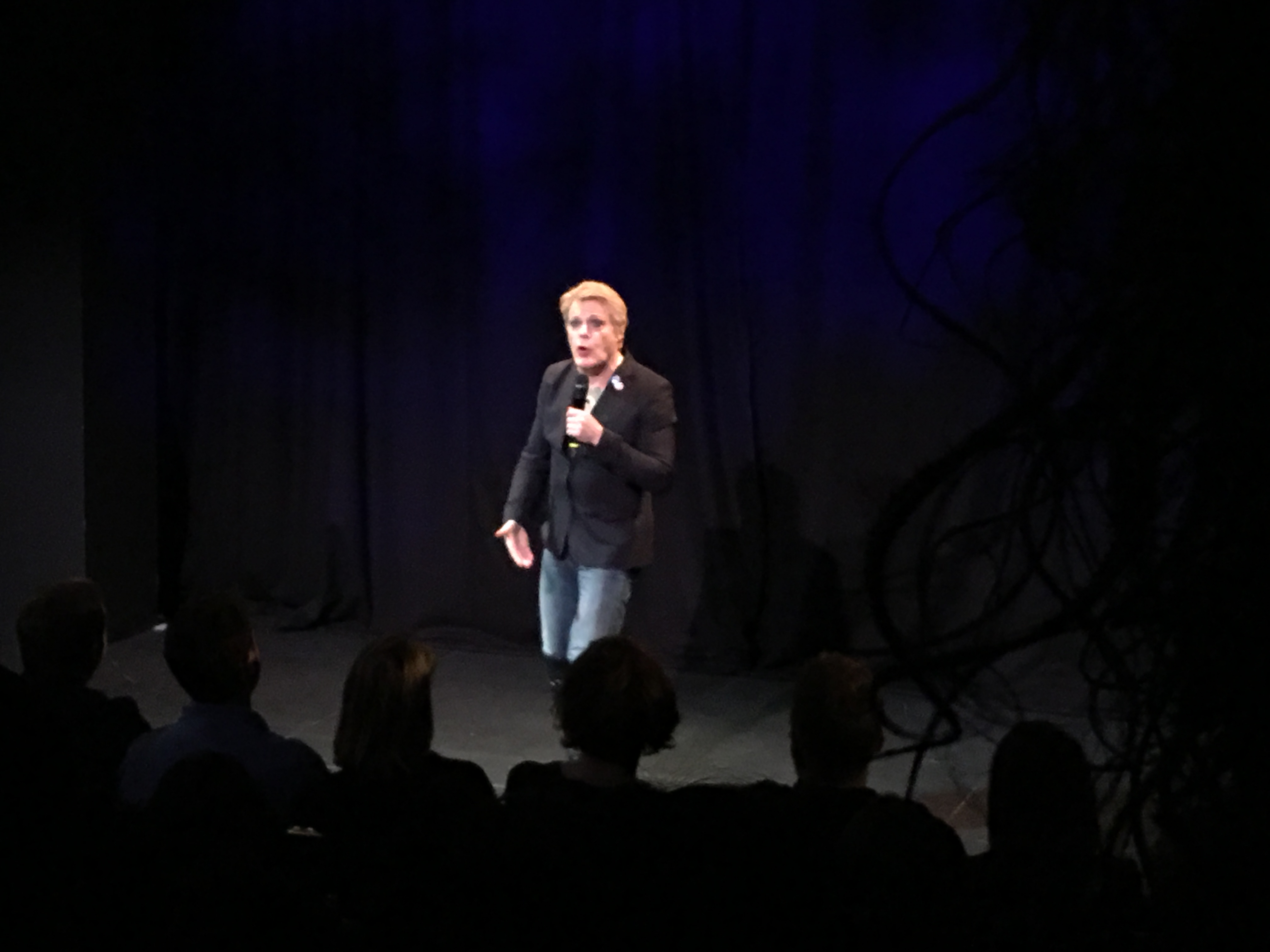 In my quest to see as many of my comedy inspirations as I can I managed to get myself a pair of tickets to see Frank Skinner at the Soho Theatre. Maybe 2 years ago I was downstairs at the Soho Theatre to see Bridget Christie doing her show, A Bic for Her. There is no allocated seating at any show I’ve been to here so I knew to get there early and try to get the best seats we can. The other problem is they really cram the seats together so you are uncomfortably close to other people there. Squeezing 4 chairs round a small table with not enough space to put your legs in front of you can make for a very uncomfortable experience and I wanted to make sure we had as much space as we needed.

I had collected my tickets earlier in the evening and told doors opened around 5 past 9. We got there at that time expecting to be directed to the main bar – where they often make people queue for entrance – but they let us stay in the foyer/ticket office and 1 minute later they opened the stairs and we were perhaps in the first 10 people into the area. I nipped past some people going to the bar and although did get front row seats, we were in the second row with an obscured view of the mic. I also had plenty of leg room. We sat at two seats on the table for 4 and the room filled up quickly.

9.30 the place had filled up but wasn’t full. No-one had taken the extra seats on our table so we didn’t feel as claustrophobic as others who really must have felt like sardines! The lights dimmed and Frank took the stage.

He explained it was a low-key show with no structure and he’d just talk on stage and to the audience and humour would come. What followed next was very unexpected!

He asked an audience member what he thought the colour of a banana was (the insides). After this answer (incorrect – banana)  asked what one guy was called. He then asked him his job and someone else from the other side of audience shouted “He’s a LINE-O! LINE-O!” Now I knew that the audience member wasn’t a member of The Thundercats but it wasn’t until Frank replied back with ‘Are you an assistant referee?’ that it turned out the shouter hidden in the darkness was correct! It turned out the guy recognised him from TV! This produced a great callback through-out the show to either the linesman or the guy who shouted out.

The topic of conversation jumped all over the place. At one point he discussed losing his virginity to a prostitute for £5 and compared that to what we were getting for our ticket entry fee. It then moved onto tube stations with lift – how it easily could have become a game show in itself. This went on for quite a few minutes as audience members tried to remember tube stations with lifts. He also covered a comedian with white teeth and why his own dentist suggested it to him, but just to make them less yellow!

Further audience interaction appeared when Frank said he went to Deal and an audience member said that his Gym Trainer saw him in Deal and took a photo of him! At this point it seemed that everyone in the audience know at least one stranger in the audience, or just Frank. As the show progressed, and people got drunker, there was more and more audience participation. Unfortunately it wasn’t all ‘Lineo!’ types chants. This was a bit tedious but most people seemed to respond well to it and join in. Having only paid a fiver I guess people thought they could act how they wanted.

The last ‘bit’ of the show involved a comparison between taking a dead fox from the road and taking it back to his flat to either make it into a hat or to fuck it. This strange segway really didn’t hit home but some people in the audience did laugh a little. The conversation then went into male fox having barbed cocks.

It was a very strange show. I think the concept appeared to be “Baddiel and Skinner Unplanned (without Baddiel)” however as an audience member I think that replacing David Baddiel with just drunk members of the public meant that the comedy didn’t flow and the conversation rarely developed. For £5 I was glad that I went and I’m glad I’ve seen Frank live in a smaller venue than where he’d normally be, like the Hammersmith Apollo.  Leaving the gig we both agreed it was a good night out for £5. We enjoyed the venue, the structure of the set (or lack of it) and the informal manner of the show . Sometimes a topic fell flat and he could just move onto something else.

I’d like to see more comedians do £5 sets in central London. Sure, it wont make them millions but recently Russel Howard, Michael Macintye and a few others have done shows in some of the smaller London venues. The tickets sell out fast but its good to see them trying stuff out and by doing it in front of a live audience they can really get a feel on how the material is being reiceved.