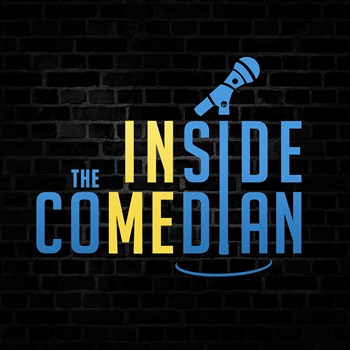 A sunday afternoon – perfect for Comedy. With tickets for only a fiver it would have been rude to not go. I haven’t been to any other recordings of ‘Inside the Comedian’ since the one I blogged about earlier so I was well over-due a show. It was also going to be a ‘double header’ with the new show from the gang that brought you ‘Do The Right Thing’ – Bad Therapy.

This recording was also at The Phoenix in Caverdish Square. Nice and easy to get to.

I got there a little early to try to catch up on some blogging but as I approached the pub I bumped into @AndyMC, @NealP55 and @MrPLitchfield. I’d not met Paul before but I had seen him perform as part of The Trap during All Day Edinburgh.

We went inside and grabbed a drink. It wouldn’t be long until the doors opened and we headed downstairs. Front row seats were needed and luckily no-one was challenging us for our primo seating.

A short interval David Reed took the stage and Inside the Comedian began.

It is a hard balance to make in having a ‘comedian interviewing comedian’ discussion without it being too much of just one big inside joke and I think David Reed does this perfectly. By aiming to be more Parkinson in his interview technique it helps to bring the humour and over-the-topness of some of these interviews. The guest this show was Marcus Bridgestock. I saw Marcus a year or so ago at his show downstairs at the Soho Theatre and really enjoyed his show. He managed to bring the kind of improv skills that Inside the Comedian really needs. There was plenty of ‘yes and-ing’ and that’s what this podcast needs. The 8 legs of government was a path Marcus gave himself to navigate and he did so with conviction. David did point out that the last one would be all we’d be able to remember, Law, but then he also mentioned Gastronomy…. and  how the current government has forgotten this important pillar! The Podcast will be available soon so I wont ruin it at all for you.

After another interval Michael Legge took to the stage to introduce Bad Therapy. Michael, Margret and Danielle would be acting as a shirks to today’s patient – Doc Brown/Ben Smith. This was a new format for a podcast. Three people interviewing one person. The podcast was to be split into 3 parts where Doc Brown would be asked about his past, his presents and his future. Each section would be 15 minutes long and was sounded by an alarm to signal the end. In the final podcast maybe this will be tidied up however during this recording the 15 minute sections didn’t really mark the start/finish of past/present future. We had some interesting glimpes into the lives of all the people on the stage. People talked about actual therapy sessions – or even attempted ones in newsagents, hypnosis, and one of my favourite things – T25 volkswagen campervans!

The format of the show worked really well as an idea. Hopefully it will come across how enjoyable it was for everyone. The audience could tell the performers were having fun and along with his relaxed delivery, Doc Brown opened up and I certainly knew more about him at the end of the show than I did at the beginning.

When these are next being recorded, make sure you do get tickets. 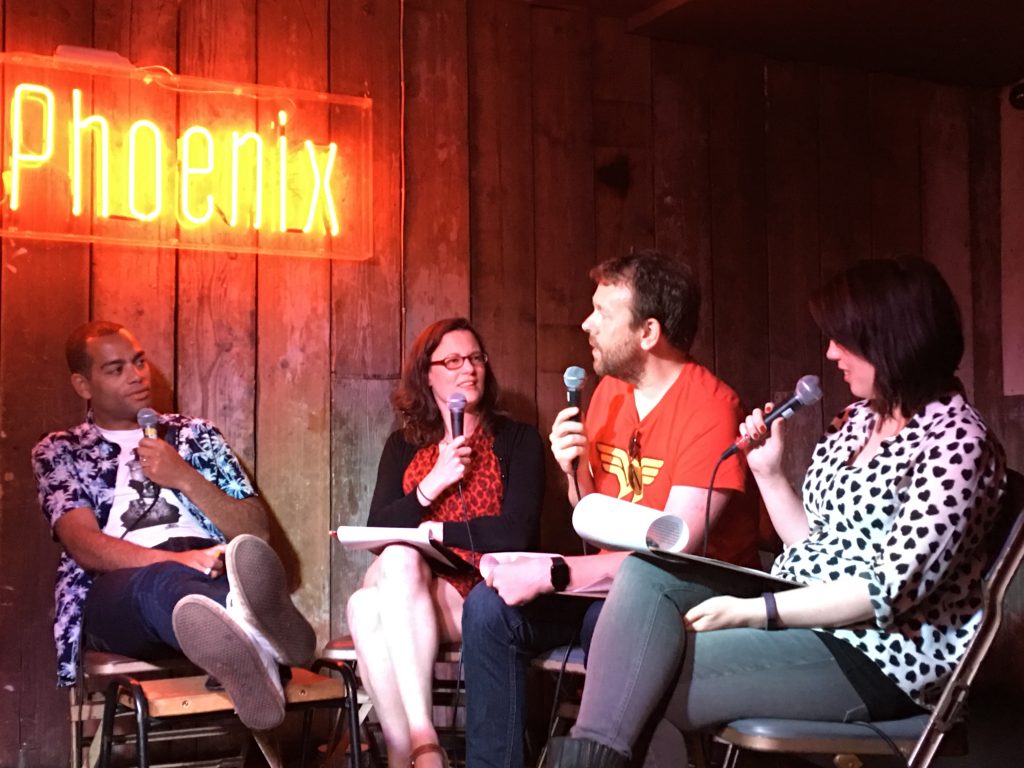 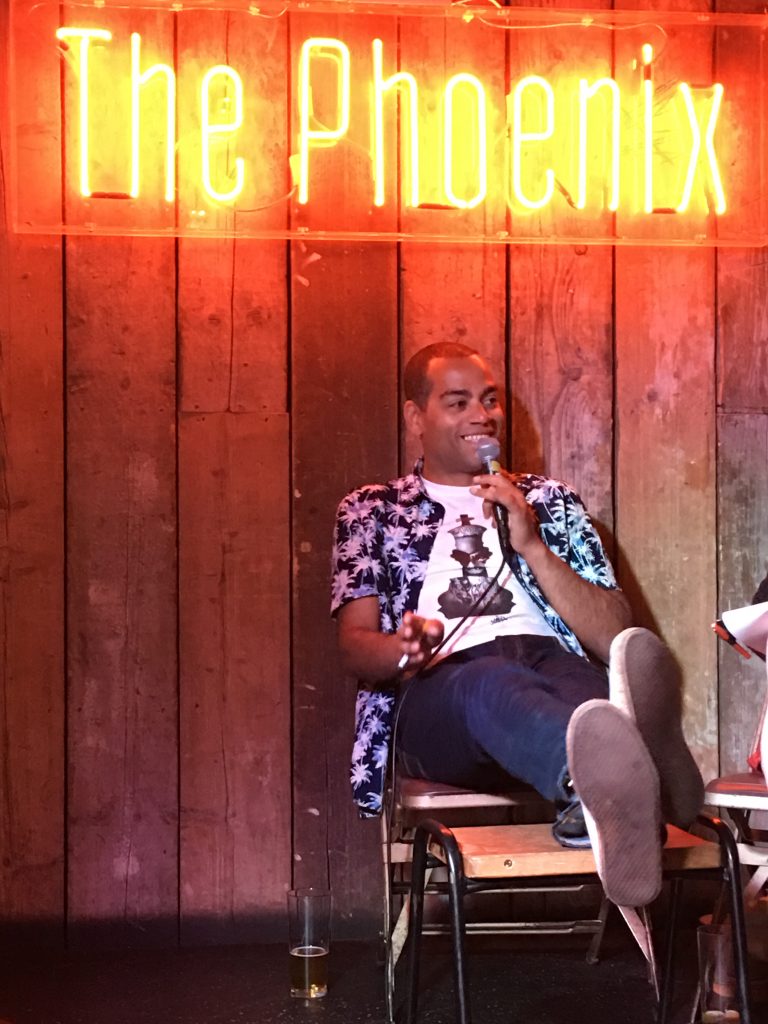 I really enjoyed the comedy impro – Criminal – the other week and when both David Reed & Danielle Ward tweeted they were doing a double-header I had to book tickets. Only a fiver as well! Great value for money.

I’ve not been to The Pheonix since All Day Edinburgh last year. Last time I came for an individual gig was probably a Pappy’s or Do The Right Thing recording. Its a big venue but underground and no wifi, in case that matters to you. Its just up from Oxford Circus (or down from BBC Radio Theatre – if thats a better point of reference)

I arrived with moments to spare and bumped into a couple of my comedy chums. We managed to grab a table right in front of the stage and I look forward to the evening. One of my chums asked if the music playing was Manic Street Preachers but unfortunately my music knowledge is a bit pap so I wasn’t sure.

Danielle took to the stage and explained the show would be in two halves – she would present Spookywookycocktailhour and then there would be an interval and David would be Inside the Comedian during the 2nd half. She also said she’d made producer Ben play the Manics so my chum was right.

Spookywookycocktailhour was in 3 parts. There was a short play, followed by a sketch, then another short play. The rest of the cast joined the stage – Abigail Burgess    & William Andrews.

Short play one involved the re-animation of a lady’s husband. As with all re-animation stories there was an unexpected twist with the recently revived that brought a level of mild peril to the proceedings. Abigail played the wife, William played the Doctor, Danielle the assistant and David played the husband and all were excellent!

The sketch was about twins. One of which was a grumpy french guy.

Short play two, Danielle explained, would be a farce. Who doesn’t like a farce? not me, I love the silliness of them! This play had a guest appearance by everyone’s stereotyped Northern Irish comedian, Michael Legge. It all revolved around an ‘end of life’ care home and a brothel. Who hasn’t made THAT mistake before?

The interval came and went with little fanfair. The 2nd half of the night would be Inside the Comedian. As an enjoyer of comedy podcasts and listened to well over 100 hours of comedians interviewing comedians, I did wonder how niche this would be. Chatting to one of my comedy chums, we weren’t sure if it was going to be a load of back-references to other podcasts/tropes that get repeated indefinately.

David took the stage and after a Parkinson-esque introduction to Michael Legge, the show started. David had a couple of sheets of pre-prepared questions/talking points but the star of this was Michael. Luckily his long career of Improv had him well protected and ready for the challenges that would be put his way. We heard about his Improv troop of 50 people, the Royal Variety performance, who he gets all his jokes from, and the interview ended on a bit of word association. David’s interview character worked really well and there were only a few times when he struggled to stay in character and failed to hold in the laughter caused by some of Michael’s replies. I am sure that there will be some smart editting by the team before this is released as a podcast however it just goes to show you should try to attend these shows in person.

there was a tiny interval and David was joined on stage by Tom Bell. I’ve not seen him before but we worked very well with David on stage. It started with learning about Tom’s time as a boat, the TV shows he’d work on, The Blind Panda comedy venue (in Hove, sadly no longer around) with its unique sunken stage at the bottom of a 90 foot hole with 5 seats at the very top, although one of the seats was on a ‘bungie jump’ type mechanism, Felicity Kendal (two very different sides to her) and ended with Tom reciting parts of the famous characters he has played.

The crowd went on an awesome journey for the night. The two episodes of ‘Inside The Comedian’ would be released as a podcast so you can enjoy them if you weren’t there. Danielle explained at the start of the night that her stuff is more just getting a recording of stuff for prosperity. There is a chance some might appear on Renaissance FM, but if it doesn’t then it will be released online at some point.

Like how the night started, at the end of the night I left as quickly as I arrived. I will get tickets to the next ‘Inside The Comedian’ and I wonder if it will develop further. Would people like something that lampoons the very thing that comedy fans spend months listening to? I was expecting to hear a choice direct quotes from other podcasts and I don’t know whether it was politeness, industry informal rules or it just not being the direction this show is going to take, that they didn’t appear.

I really hope it does make it as a podcast. Even 6 episode (3 nights of recording) would be great output. I do regret not chatting to Ben Walker at the end of the night as I really want to talk to him about how he got involved in the podcast recording business. Interesting to a small handful of people but as I’d be one of them, it wouldn’t be wasted on me.

See you next time, comedy fans. I leave you with some photos from Andy McHaffie. See if you can guess who was Michael Legge in his ‘disguise’!

A great night last night by @captainward, @MrDavidReed and the gang. Looking forward to the new podcasts! pic.twitter.com/FCI2TLTRtd